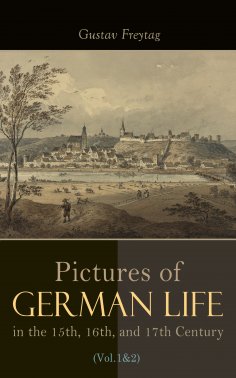 This carefully crafted e-artnow ebook "Pictures of German Life in the 15th, 16th, and 17th Centuries" is formatted for your eReader with a functional and detailed table of contents.
Volume 1:
Scenes from the Hussite War (1425):
Emigration of Germans to the east after the thirteenth century
Contrast of the Bohemians…
A German Lady of the Royal Court:
Life at Court
The last of the Luxemburgers
The Hungarian Crown...
A Travelling Student:
Characteristics of the fifteenth century
Introductions in the sixteenth century
The Latin schools, the children of the people as scholars…
The Mental Struggles of a Youth, and his Entrance into a Monastery (1510):
The church
Brotherhoods; Indulgences...
Out of the Cloister into the Struggle (1522):
The storm among the people
Luther's popularity
Narrative of Johann Kessler...
Doctor Luther (1517 to 1546):
Three letters to the Pope
Luther as a writer
Activity of his latter years...
German Princes at the Imperial Diet (1547):
Luther and Charles V.
The Roman Empire
Weakness of the Imperial power
Alliance of the German opposition with France...
A Burgher Family:
Insight into the lower circles of German life
Social superiority of the Protestant provinces...
The Marriage and Housekeeping of a Young Student:
Position of women in the middle ages
Marriage considered as an alliance between families...
Of a Patrician House (1526 to 1598):
Hans Schweinichen's account of the riches of the Fuggers...
German Nobility in the Sixteenth Century:
False position in the nation
Transition to modern life...
German Ideas of the Devil in the Sixteenth Century...
Volume 2:
The Thirty Years' War (1618 to 1648)
Life and Manners of the Soldiers
The Villagers and their Pastors
Clippers of Money and Public Opinion
The Cities
The Peace (1650)
Rogues and Adventurers
Engagement and Marriage at Court (1661)
Of the Homes of German Citizens
German Life at the Baths in the Seventeenth Century
Jesuits and Jews
The Wasunger War (1747)…