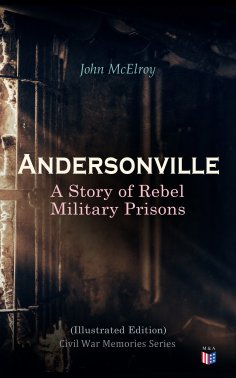 Madison & Adams Press presents the Civil War Memories Series. This meticulous selection of the firsthand accounts, memoirs and diaries is specially comprised for Civil War enthusiasts and all people curious about the personal accounts and true life stories of the unknown soldiers, the well known commanders, politicians, nurses and civilians amidst the war.
"Andersonville: A Story of Rebel Military Prisons" is one of the best accounts about the Civil War. McElroy, the author, vividly tells his story about the time he spent as a prisoner of Andersonville and a few other Confederate prisons he was kept at. The book is full of interesting stories and amazing facts about the Confederate prison system and the way prisoners were treated in the South!

John McElroy (1846–1929) was an American printer, soldier, journalist and author, known mainly for writing the novel The Red Acorn and the four-volume Andersonville: A Story of Rebel Military Prisons, based upon his lengthy confinement in the Confederate Andersonville prison camp during the American Civil War.