The Irish Guards in the Great War (Complete Edition: Volume 1&2) 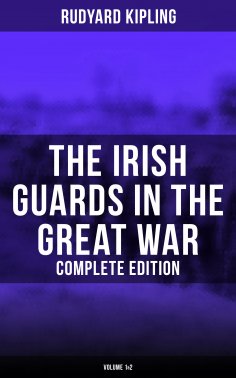 This eBook edition of "The Irish Guards in the Great War" has been formatted to the highest digital standards and adjusted for readability on all devices.
These volumes try to give soberly and with what truth is possible, the experiences of both battalions of the Irish Guards from 1914 to 1918. The point of view is the battalions', and the facts mainly follow the Regimental Diaries, supplemented by the few private letters and documents which such a war made possible, and by some tales that have gathered round men and their actions.
Joseph Rudyard Kipling (1865-1936) was an English short-story writer, poet, and novelist. He wrote tales and poems of British soldiers in India and stories for children. He is regarded as a major innovator in the art of the short story; his children's books are classics of children's literature; and one critic described his work as exhibiting "a versatile and luminous narrative gift".
Contents:
Mons to La Bassée
La Bassée to Laventie
The Salient to The Somme
The Somme to Gouzeaucourt
Arras to The Armistice
Loos and The First Autumn
Salient and the Somme
Rancourt to Bourlon Wood
Arras to the End