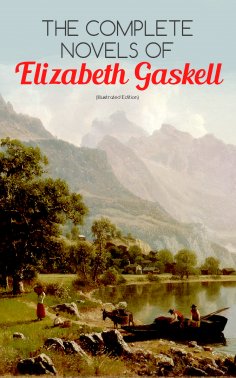 This collection includes 10 classics by this notable Victorian author, whose novels shown brutal and detailed portraits of lives of the poor, the orphans and the working class people in mid Victorian England.
"Mary Barton" is set in the English city of Manchester and deals with the difficulties faced by the Victorian working class.
"The Moorland Cottage" – Maggie Browne, a daughter of a deceased clergyman, is asked to give up her future and sacrifice herself for the good of her selfish brother.
"Cranford" – Marry Smith, likes to remember the stories of Cranford's illustrious citizens, sympathetically portraying transformation of a small town customs and values.
"Ruth" – A young orphan girl gets a job at a ball to repair torn dresses. There she meets a handsome aristocrat and falls in love, but instead of living happily ever after, she ends up abandoned and pregnant.
"North and South" – Margaret Hale's family settles in Milton where she witnesses the brutal world wrought by the Industrial Revolution, seeing employers and workers clashing in the first strikes.
"Sylvia's Lovers" is a sad story of love and betrayal set in the time of Napoleonic Wars.
'Wives and Daughters" – An attractive Molly Gibson gets send away from home as she arouses interest of her father's associates. But when she falls in love, her loved one chooses her step sister.
"A Dark Night's Work" is a story of a country lawyer, Edward Wilkins, who tries to live a rich life like his clients, but ends up in debt, and eventually commits a crime.
"My Lady Ludlow" recounts the daily lives of the widowed Countess of Ludlow of Hanbury and the spinster Miss Galindo, and their caring for other single women and girls.
"Cousin Phillis" – A 19-year-old Paul Manning moves to the country and befriends his mother's family and his cousin Phillis, who is confused by her own placement at the edge of adolescence.
"Mrs. Gaskell and Knutsford" is a biography of Elizabeth Gaskell.