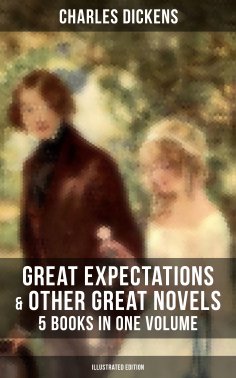 A Tale of Two Cities: A Tale of Two Cities is a novel by Charles Dickens, set in London and Paris before and during the French Revolution. The novel depicts the plight of the French peasantry demoralized by the French aristocracy in the years leading up to the revolution, the corresponding brutality demonstrated by the revolutionaries toward the former aristocrats in the early years of the revolution, and many unflattering social parallels with life in London during the same time period. It follows the lives of several protagonists through these events. Great Expectations: Great Expectations is a bildungsroman, or a coming-of-age novel, and it is a classic work of Victorian literature. It depicts the growth and personal development of an orphan named Pip. The novel was first published in serial form in Dickens' weekly periodical All the Year Round, from 1 December 1860 to August 1861. David Copperfield: David Copperfield is the common name of the eighth novel by Charles Dickens, first published as a novel in 1850. Many elements of the novel follow events in Dickens' own life, and it is probably the most autobiographical of his novels. Oliver Twist: Oliver Twist is notable for Dickens' unromantic portrayal of criminals and their sordid lives. The book exposed the cruel treatment of many a waif-child in London, which increased international concern in what is sometimes known as "The Great London Waif Crisis": the large number of orphans in London in the Dickens era. A Christmas Carol: The tale has been viewed by critics as an indictment of 19th-century industrial capitalism. It has been credited with restoring the holiday to one of merriment and festivity in Britain and America after a period of sobriety and sombreness.
Charles Dickens (1812–1870) was an English writer and social critic. He created some of the world's best-known fictional characters and is regarded by many as the greatest novelist of the Victorian era.