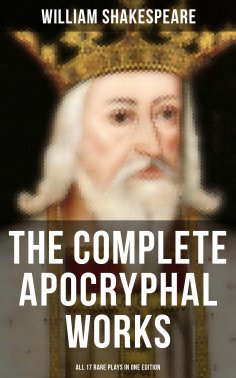 Apocrypha is a group of plays and poems that have sometimes been attributed to William Shakespeare, but whose attribution is questionable for various reasons. The issue is separate from the debate on Shakespearean authorship, which addresses the authorship of the works traditionally attributed to Shakespeare. Table of Contents: Arden Of Faversham A Yorkshire Tragedy The Lamentable Tragedy Of Locrine Mucedorus The King's Son Of Valentia, And Amadine, The King's Daughter Of Arragon. The London Prodigal The Puritaine Widdow The Second Maiden's Tragedy Sir John Oldcastle Lord Cromwell King Edward The Third Edmund Ironside Sir Thomas More Faire Em A Fairy Tale In Two Acts The Merry Devill Of Edmonton Thomas Of Woodstock William Shakespeare (1564 – 1616) was an English poet and playwright, widely regarded as the greatest writer in the English language and the world's pre-eminent dramatist. He is often called England's national poet and the "Bard of Avon". His extant works, including some collaborations, consist of about 38 plays, 154 sonnets, two long narrative poems, and a few other verses, the authorship of some of which is uncertain.