Notes from the Underground & Other Tales – 7 Titles in One Edition 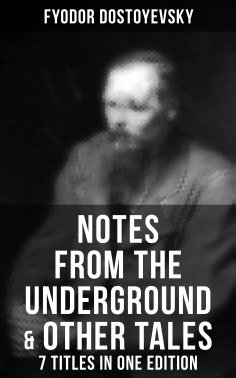 Musaicum Books presents to you this carefully created volume of "Notes from the Underground & Other Tales – 7 Titles in One Edition". This ebook has been designed and formatted to the highest digital standards and adjusted for readability on all devices.
Fyodor Mikhailovich Dostoyevsky (1821 – 1881), sometimes transliterated Dostoevsky, was a Russian novelist, short story writer, and essayist. Dostoyevsky's literary works explore human psychology in the troubled political, social and spiritual context of 19th-century Russia. This translation by Constance Garnett from the original Russian is widely regarded as a reference. Garnett translated seventy volumes of Russian prose for publication, including all of Dostoyevsky's novels. Dostoyevsky's works of fiction include 17 short stories, in this edition we present 7 stories, including two of his 2 most famous works "White Nights" and "Notes From the Underground": WHITE NIGHTS, NOTES FROM UNDERGROUND, A FAINT HEART, A CHRISTMAS TREE AND A WEDDING, POLZUNKOV, A LITTLE HERO and MR. PROHARTCHIN.