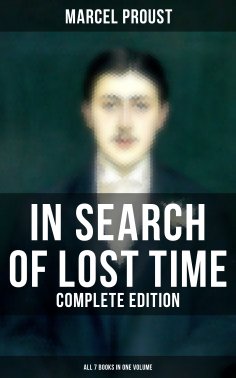 In Search of Lost Time is a series of seven highly acclaimed novels which inspired modern writers with its artistic craft and philosophical insight regarding memory and time. It is often suggested that perhaps Joyce's Ulysses was in some way inspired by this French tour de force. These bestselling novels recount the experiences of an unnamed narrator while he is growing up, learning about art, participating in society, and falling in love.
Swann's Way: The young protagonist dreads waking up at night and not having his mother's good-night kiss…
Within a Budding Grove beautifully examines the complex adolescent relationships.
The Guermantes Way: The adult protagonist steps into the dazzling Parisian society of 19th century along with his obsession for Mme. de Guermantes.
Cities of Plain: No matter how hard he tries to ignore or stay indifferent to closeted homosexual relationships around him, these and his own sexual desires become intricate part of his memories.
The Captive dwells into the nature of relationships when couples fall out of love and yet don't have courage to break free.
The Sweet Cheat Gone: People who leave rarely come back...
Time Regained: After the WW1, he goes back to Paris to meet the people he once knew again, but time has never stopped for anyone
Marcel Proust (1871–1922) was an inspirational French novelist, critic and essayist who is now considered as one of the most influential authors of the 20th century. His aesthetic craft and deep philosophical insight inspired numerous modern writers.