THE DIAMOND AS BIG AS THE RITZ 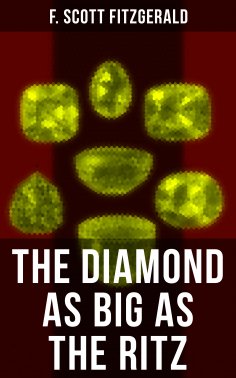 This eBook edition of "THE DIAMOND AS BIG AS THE RITZ" has been formatted to the highest digital standards and adjusted for readability on all devices.
"The Diamond as Big as the Ritz" is a novella, included in Fitzgerald's collection Tales of the Jazz Age. Much of the story is set in Montana, a setting that may have been inspired by the summer that Fitzgerald spent near White Sulphur Springs, Montana in 1915. John T. Unger, a teenager from the Mississippi River town of Hades, is sent to a private boarding school near Boston. During the summer he visits the homes of his classmates, the majority of whom are from wealthy families. In the middle of his sophomore year, a young man named Percy Washington is placed in Unger's dorm. During the train ride Percy boasts that his father is "by far the richest man in the world", and, when challenged by Unger, boasts that his father "has a diamond bigger than the Ritz-Carlton Hotel."
Francis Scott Key Fitzgerald (1896-1940) was an American author of novels and short stories, whose works are the paradigmatic writings of the Jazz Age. He is widely regarded as one of the greatest American writers of the 20th century. Fitzgerald is considered a member of the "Lost Generation" of the 1920s.