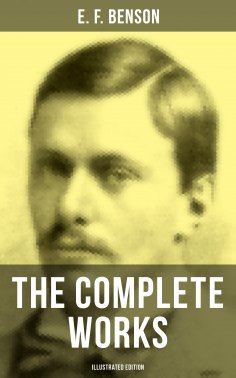 Musaicum Books presents to you this carefully created collection of 'THE COMPLETE WORKS OF E. F. BENSON (Illustrated Edition)'. This ebook has been designed and formatted to the highest digital standards and adjusted for readability on all devices.
Edward Frederic Benson (1867-1940) was an English novelist, biographer, memoirist, archaeologist and short story writer, known professionally as E.F. Benson. He started his novel writing career in 1893 with the fashionably controversial Dodo, which was an instant success, and followed it with a variety of satire and romantic and supernatural melodrama. He repeated the success of Dodo, with sequels to this novel, but the greatest success came relatively late in his career with The Mapp and Lucia series consisting of six novels and two short stories. The novels feature humorous incidents in the lives of (mainly) upper-middle-class British people in the 1920s and 1930s, vying for social prestige and one-upmanship in an atmosphere of extreme cultural snobbery. Benson was also known as a writer of atmospheric, oblique, and at times humorous or satirical ghost stories.
Table of Contents:
Make Way For Lucia:
Queen Lucia
Miss Mapp
Lucia in London
Mapp and Lucia
Lucia's Progress or The Worshipful Lucia
Trouble for Lucia
The Male Impersonator
Desirable Residences
Novels:
Dodo; A Detail of the Day
Dodo's Daughter or Dodo the Second
Dodo Wonders
David Blaize
David Blaize and the Blue Door
David Blaize of King's
The Rubicon
The Judgement Books
The Vintage
Mammon and Co.
Scarlet and Hyssop
The Relentless City
The Valkyries
The Angel of Pain
The House of Defence
The Blotting Book
Daisy's Aunt
Mrs. Ames
Thorley Weir
Arundel
Michael
Up and Down
Across the Stream
Paying Guests
Short Story Collections:
The Room in the Tower, and Other Stories
The Countess of Lowndes Square, and Other Stories
Visible and Invisible
Spook Stories
More Spook Stories
Historical Works:
Deutschland Über Allah
Crescent and Iron Cross
Charlotte Bronte