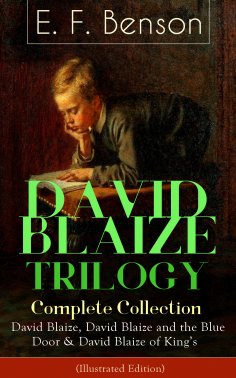 This carefully crafted ebook: "DAVID BLAIZE TRILOGY - Complete Collection: David Blaize, David Blaize and the Blue Door & David Blaize of King's (Illustrated Edition)" is formatted for your eReader with a functional and detailed table of contents. David Blaize Trilogy is a series of novels by English author Edward Frederic Benson about the life of a young boy from his early childhood to college years. The first novel in the series is named David Blaize. Set in England before the First World War, the novel describes David's years at prep school and public school, his studies, sports and friendships, and finally, his brush with death when he stops a runaway horse. A second novel, David Blaize and the Blue Door, set in David's early childhood, was published in 1918. In contrast to the first book, it is a children's fantasy influenced by the work of Lewis Carroll, in the style of Alice's Adventures in Wonderland, set in a dream landscape permeated with nonsense. David Blaize of King's is Benson's 1924 sequel to David Blaize. It follows David's university career at King's College, Cambridge. Edward Frederic Benson (1867-1940) was an English novelist, biographer, memoirist, archaeologist and short story writer, known professionally as E.F. Benson. His novels feature humorous incidents in the lives of (mainly) upper-middle-class British people in the 1920s and 1930s, vying for social prestige and one-upmanship in an atmosphere of extreme cultural snobbery. Table of Contents: David Blaize David Blaize and the Blue Door David Blaize of King's