The Country of the Blind, and 32 Other Stories (The original unabridged edition) 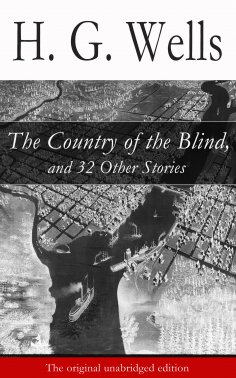 This carefully crafted ebook: "The Country of the Blind, and 32 Other Stories (The original unabridged edition)" is formatted for your eReader with a functional and detailed table of contents. "The Country of the Blind" is a short story written by H. G. Wells. It was first published in the April 1904 issue of The Strand Magazine and included in a 1911 collection of Wells's short stories, The Country of the Blind and Other Stories. It is one of Wells's best known short stories and features prominently in literature dealing with blindness. Table of contents: The jilting of Jane -- The cone -- The stolen bacillus -- The flowering of the strange orchid -- In the Avu Observatory -- Aepyornis Island -- The remarkable case of Davidson's eyes -- The Lord of the Dynamos -- The moth -- The treasure in the forest -- The story of the late Mr. Elvesham -- Under the knife -- The sea raiders -- The obliterated man -- The Plattner story -- The red room -- The purple Pileus -- A slip under the microscope -- The crystal egg -- The star -- The man who could work miracles -- A vision of judgment -- Jimmy Goggles the God -- Miss Winchelsea's heart -- A dream of Armageddon -- The valley of spiders -- The new accelerator -- The truth about Pyecraft -- The magic shop -- The empire of the ants -- The door in the wall -- The country of the blind -- The beautiful suit. Herbert George "H. G." Wells (1866 – 1946) was an English writer, now best known for his work in the science fiction genre. He was also a prolific writer in many other genres, including contemporary novels, history, politics and social commentary, even writing textbooks and rules for war games.