BEYOND GOOD AND EVIL (Unabridged) 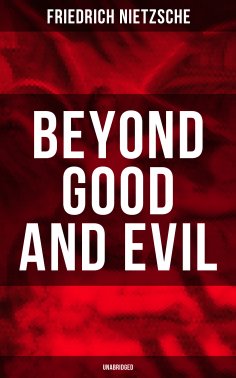 In Beyond Good and Evil, Nietzsche accuses past philosophers of lacking critical sense and blindly accepting dogmatic premises in their consideration of morality. Specifically, he accuses them of founding grand metaphysical systems upon the faith that the good man is the opposite of the evil man, rather than just a different expression of the same basic impulses that find more direct expression in the evil man. The work moves into the realm "beyond good and evil" in the sense of leaving behind the traditional morality which Nietzsche subjects to a destructive critique in favor of what he regards as an affirmative approach that fearlessly confronts the perspective nature of knowledge and the perilous condition of the modern individual. Friedrich Wilhelm Nietzsche (1844-1900) was a German philosopher, cultural critic, poet, and Latin and Greek scholar whose work has exerted a profound influence on Western philosophy and modern intellectual history. Before turning to philosophy, he began his career as a philologist and worked at the Department of Classical Philology at the University of Basel, but he had to retire due to health problems. Nietzsche's body of writing spanned philosophical polemics, poetry, cultural criticism and fiction, and drew widely on art, philology, history, religion and science. His writing displayed a fondness for aphorism and irony, while engaging with a wide range of subjects including morality, aesthetics, tragedy, epistemology, atheism, and consciousness.