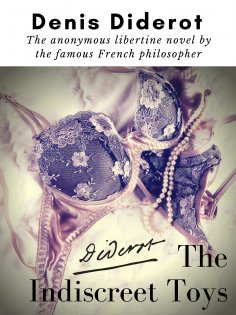 The Indiscreet Jewels (or The Indiscreet Toys, or The Talking Jewels, French: Les bijoux indiscrets) is the first novel by Denis Diderot, published anonymously in 1748. It is an allegory that portrays Louis XV as the sultan Mangogul of the Congo who owns a magic ring that makes women's genitals ("jewels") talk.

Plot Summary : Sultan Mangogul of Congo is bored of court life and suspects his mistress Mirzoza of infidelity. Happily for him, a genie presents him with a magical ring with unique properties. When the ring is rubbed and pointed at the genitals of any woman in the vicinity, the genitals ("discreet jewels") begin speaking of their past amorous experiences to the confusion and consternation of their owner. The Sultan uses the ring in this manner about thirty times - usually at a dinner or a social meeting; on these occasions, the Sultan is typically visible to the woman. However, since the ring has the additional property of making its owner invisible when required, a few of the sexual experiences recounted are through direct observation with the Sultan making himself invisible and placing his person in the unsuspecting woman's boudoir.

Denis Diderot (1713 - 1784) was a French philosopher, art critic, and writer. He was a prominent figure during the Enlightenment and is best known for serving as co-founder, chief editor, and contributor to the Encyclopédie along with Jean le Rond d'Alembert. Diderot's literary reputation during his lifetime rested primarily on his plays and his contributions to the Encyclopédie; many of his most important works, including Jacques the Fatalist, Rameau's Nephew, Paradox of the Actor, and D'Alembert's Dream, were published only after his death.