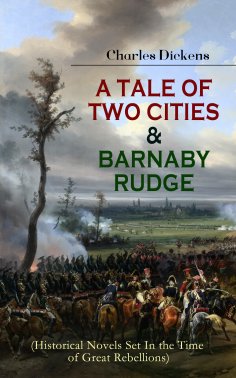 This carefully crafted ebook: "A TALE OF TWO CITIES & BARNABY RUDGE" is formatted for your eReader with a functional and detailed table of contents.
A Tale of Two Cities is set in London and Paris before and during the French Revolution. The novel depicts the plight of the French peasantry demoralized by the French aristocracy in the years leading up to the revolution, the corresponding brutality demonstrated by the revolutionaries toward the former aristocrats in the early years of the revolution, and many unflattering social parallels with life in London during the same period.
Barnaby Rudge: A Tale of the Riots of Eighty is largely set during the Gordon Riots of 1780. The story begins on an evening of foul weather in the year 1775 where we meet several families; The Willets, The Vardens, The Chesters, and Barnaby Rudge, a simpleton who wanders around with his pet raven, Grip. As the story advances five years to a wintry evening in early 1780, many of the characters get involved in the infamous Protestant riots led by Sir George Gordon.
Charles Dickens (1812-1870) was an English writer and social critic. He created some of the world's best-known fictional characters and is regarded as the greatest novelist of the Victorian era.