A TALE OF TWO CITIES (Illustrated) 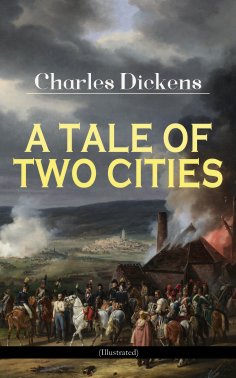 "It was the best of times, it was the worst of times, it was the age of wisdom, it was the age of foolishness…"
A Tale of Two Cities is a novel set in London and Paris before and during the French Revolution. The novel depicts the plight of the French peasantry demoralized by the French aristocracy in the years leading up to the revolution, the corresponding brutality demonstrated by the revolutionaries toward the former aristocrats in the early years of the revolution, and many unflattering social parallels with life in London during the same period.
Charles Dickens (1812-1870) was an English writer and social critic. He created some of the world's best-known fictional characters and is regarded as the greatest novelist of the Victorian era. His works enjoyed unprecedented popularity during his lifetime, and by the twentieth century critics and scholars had recognized him as a literary genius. His novels and short stories enjoy lasting popularity.