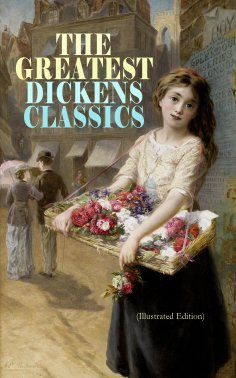 This carefully crafted ebook: "THE GREATEST DICKENS CLASSICS (Illustrated Edition)" is formatted for your eReader with a functional and detailed table of contents:
Our Mutual Friend - explores the conflict between doing what society expects of a person and the idea of being true to oneself
The Pickwick Papers - To extend his researches into the quaint and curious phenomena of life, Samuel Pickwick suggests that he and three other "Pickwickians" should make journeys to places remote from London and report on their findings to the other members.
Oliver Twist is an orphan who starts his life in a workhouse and is then sold into apprenticeship with an undertaker. He escapes from there and travels to London, where he meets the Artful Dodger, a member of a gang of juvenile pickpockets led by the elderly criminal, Fagin…
A Christmas Carol tells the story of a bitter old miser named Ebenezer Scrooge and his transformation after visitations by the ghost of his former business partner and the Ghosts of Christmas Past, Present and Yet to Come.
David Copperfield is a fatherless boy who is sent to lodge with his housekeeper's family after his mother remarries, but when his mother dies he decides to run away…
Hard Times is set in the fictional city of Coketown and it is centered around utilitarian and industrial influences on Victorian society.
A Tale of Two Cities depicts the plight of the French peasantry demoralized by the French aristocracy in the years leading up to the revolution, and many unflattering social parallels with life in London during the same period.
Great Expectations depicts the personal growth and development of an orphan nicknamed Pip in Kent and London in the early to mid-19th century.
Bleak House – legal thriller based on true events.
Little Dorrit – criticize the institution of debtors' prisons, the shortcomings of both government and society.
COLLECTED LETTERS
THE LIFE OF CHARLES DICKENS by John Forster