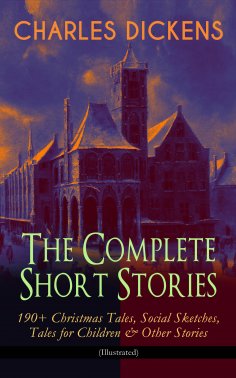 This carefully crafted ebook: “CHARLES DICKENS – The Complete Short Stories: 190+ Christmas Tales, Social Sketches, Tales for Children & Other Stories (Illustrated)” is formatted for your eReader with a functional and detailed table of contents:
Christmas Novellas
A Christmas Carol
The Chimes
The Cricket on the Hearth
The Battle of Life
The Haunted Man
Short Story Collections
Sketches by Boz
Sketches of Young Gentlemen
Sketches of Young Couples
Master Humphrey' Clock
Reprinted Pieces
The Mudfog Papers
Pearl-Fishing (First Series)
Pearl-Fishing (Second Series)
Christmas Stories
Other Stories
Children's Books
Child's Dream of a Star
Holiday Romance
Stories About Children Every Child Can Read
Criticism
Appreciations and Criticisms of the Works of Charles Dickens
The Limitations of Dickens by Henry James
The Puzzle of Dickens's Last Plot by Andrew Lang
David Copperfield by Virginia Woolf
Biographies
Charles Dickens by G. K. Chesterton
The Life of Charles Dickens by John Forster
Dickens' London by M. F. Mansfield
Charles Dickens (1812-1870) was an English writer and social critic. He created some of the world's best-known fictional characters and is regarded as the greatest novelist of the Victorian era. His works enjoyed unprecedented popularity during his lifetime, and by the twentieth century critics and scholars had recognized him as a literary genius. His novels and short stories enjoy lasting popularity.