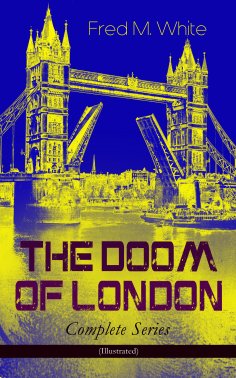 This carefully crafted ebook: "THE DOOM OF LONDON - Complete Series (Illustrated)" is formatted for your eReader with a functional and detailed table of contents.
The Doom of London is a science-fiction series of stories in which various catastrophes beset Victorian London.
Table of Contents:
The Four White Days – A sudden and deep winter paralyses the city under snow and ice.
The Four Days' Night – The city of London is beset by a massive killer smog.
The Dust of Death – Diphtheria infects the city, spreading from refuse tips and sewers.
A Bubble Burst – How a stock exchange scare dislocated the life of the Empire for two days.
The Invisible Force – What might happen when underground London is tunneled for electric railways, if an explosion should take place in one of the tubes.
The River of Death – A prolonged drought and heat wave leads up to the shrinking of the Thames, and the plague is found upstream.
Frederick Merrick White (1859–1935) is mostly known for mysteries and he is considered as one of the pioneers of the spy story. He also wrote science-fiction.