The Founding and Manifesto of Futurism (multilingual edition) 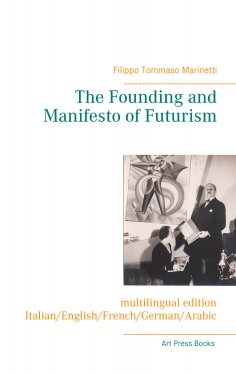 The Manifesto of Futurism written by the Italian poet Filippo Tommaso Marinetti, initiated an artistic philosophy, Futurism, that was a rejection of the past, and a celebration of speed, machinery, violence, youth and industry; it also advocated the modernization and cultural rejuvenation of Italy. Marinetti wrote the Futurist Manifesto in the autumn of 1908 and it first appeared as a preface to a volume of his poems, published in Milan in January 1909. It was published in the Italian newspaper Gazzetta dell'Emilia in Bologna on 5 February 1909, then in French as Manifeste du futurisme (Manifesto of Futurism) in the newspaper Le Figaro on 20 February 1909. This manifesto was published well before the occurrence of any of the 20th-century events which are commonly suggested as a potential meaning of this text. Many of them could not even be imagined yet. For example, the Russian Revolutions of 1917 were the first of the sort "described" by article 11 of the Manifesto, yet the first of those occurred eight years after the Manifesto's publication.

Filippo Tommaso Emilio Marinetti (22 December 1876 – 2 December 1944) was an Italian poet, editor, art theorist, and founder of the Futurist movement. He was associated with the utopian and Symbolists artistic and literary community Abbaye de Créteil between 1907 and 1908. Marinetti is best known as the author of the first Futurist Manifesto, which was written and published in 1909.