LEATHERSTOCKING TALES – Complete Series: The Deerslayer, The Last of the Mohicans, The Pathfinder, T 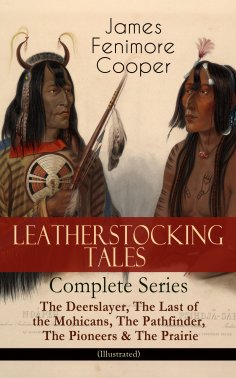 This carefully crafted ebook: "LEATHERSTOCKING TALES – Complete Series: The Deerslayer, The Last of the Mohicans, The Pathfinder, The Pioneers & The Prairie (Illustrated)" is formatted for your eReader with a functional and detailed table of contents.
The Leatherstocking Tales is a series of five novels featuring the main hero Natty Bumppo, known by European settlers as "Leatherstocking" and "The Pathfinder", and by the Native Americans as "Deerslayer" and "Hawkeye". Natty Bumppo is a resourceful Anglo-American woodsman raised in part by Native Americans, who later becomes a fearless warrior skilled in many weapons, chiefly the long rifle. His constant companion is his "brother" Chingachgook, Mohican chief, who happens to be the actual last of the Mohicans. The stories take place on the rapidly advancing frontier of New York State and focus on the evolution of the wilderness into a civilized European-American community.
Table of Contents:
The Deerslayer: The First Warpath
The Last of the Mohicans: A Narrative of 1757
The Pathfinder: The Inland Sea
The Pioneers: The Sources of the Susquehanna
The Prairie
James Fenimore Cooper (1789-1851) was a prolific and popular American writer of the early 19th century. His historical romances of frontier and Indian life in the early American days created a unique form of American literature. Before embarking on his career as a writer, Cooper served in the U.S. Navy, which greatly influenced many of his novels. The novel that launched his career was The Spy and he wrote numerous sea stories. His best-known works are five historical novels of the frontier period known as the Leatherstocking Tales. Among his most famous works is the Romantic novel The Last of the Mohicans, often regarded as his masterpiece.