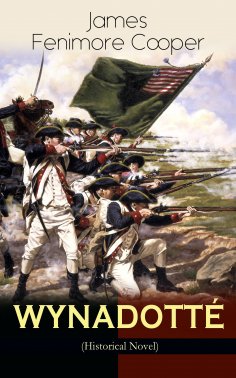 This carefully crafted ebook: “WYNADOTTÉ (Historical Novel)” is formatted for your eReader with a functional and detailed table of contents.
Wyandotté is a historical novel set during the American Revolution and tells the story of a derelict Indian "Saucy Nick", also called Wyandotté ("Great Chief"), in the remote woods of upstate New York, who stands between a small group of settlers and an Indian tribe that want to slaughter them. Wyandotté's depictions violate stereotypes of Native Americans and novel rejects the more established history of the New York border war during the Revolution.
James Fenimore Cooper (1789-1851) was a prolific and popular American writer of the early 19th century. His historical romances of frontier and Indian life in the early American days created a unique form of American literature. Before embarking on his career as a writer, Cooper served in the U.S. Navy as a Midshipman, which greatly influenced many of his novels and other writings. The novel that launched his career was The Spy, a tale about counterespionage set during the Revolutionary War. He also wrote numerous sea stories, and his best-known works are five historical novels of the frontier period known as the Leatherstocking Tales. Among his most famous works is the Romantic novel The Last of the Mohicans, often regarded as his masterpiece.