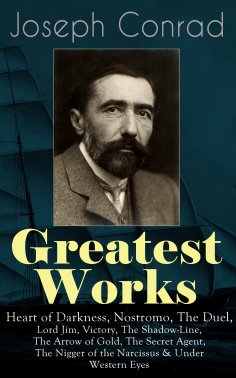 This carefully crafted ebook: "Greatest Works of Joseph Conrad: Heart of Darkness, Nostromo, The Duel, Lord Jim, Victory, The Shadow-Line, The Arrow of Gold, The Secret Agent, The Nigger of the Narcissus & Under Western Eyes" is formatted for your eReader with a functional and detailed table of contents.
Content:
Novels and Novellas:
Heart of Darkness
Lord Jim
Victory: An Island Tale
Nostromo: A Tale of the Seaboard
The Shadow Line: A Confession
The Arrow of Gold: A Story Between Two Notes
The Secret Agent: A Simple Tale
The Nigger of the 'Narcissus': A Tale of the Forecastle
The Duel
Under Western Eyes
Memoirs, Letters and Articles
A Personal Record; or Some Reminiscences
The Mirror of the Sea
Notes On Life And Letters
Autocracy And War
The Crime Of Partition
A Note On The Polish Problem
Poland Revisited
First News
Well Done
Tradition
Confidence
Flight
Some Reflections On The Loss Of The Titanic
Certain Aspects Of The Admirable Inquiry Into The Loss Of The Titanic
Protection Of Ocean Liners
A Friendly Place
On Red Badge of Courage
Biography & Critical Essays
Joseph Conrad (A Biography) by Hugh Walpole
Joseph Conrad by John Albert Macy
A Conrad Miscellany by John Albert Macy
Joseph Conrad & The Athenæum by Arnold Bennett
Joseph Conrad by Virginia Woolf
Joseph Conrad (1857-1924), was a Polish author who wrote in English after settling in England. Conrad is regarded as one of the greatest novelists in English, though he did not speak the language fluently until he was in his twenties. He wrote stories and novels, often with a nautical setting, that depict trials of the human spirit in the midst of an indifferent universe. He was a master prose stylist who brought a distinctly non-English tragic sensibility into English literature.