THE PARISH TRILOGY: Annals of a Quiet Neighbourhood, The Seaboard Parish & The Vicar's Daughter 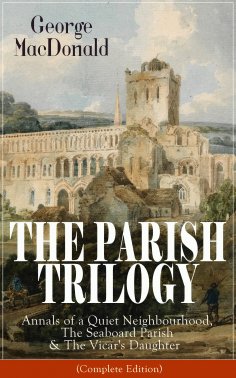 This carefully crafted ebook: "THE PARISH TRILOGY: Annals of a Quiet Neighbourhood, The Seaboard Parish & The Vicar's Daughter (Complete Edition)" is formatted for your eReader with a functional and detailed table of contents.
"Annals of a Quiet Neighbourhood" is the first part of the Parish Trilogy. The novel is actually a collection of reminiscences of the new minister at the small place, his work and relationship with people in the parish on the other hand and his rising love for the daughter in Oldastle Hall on the other hand. It is fascinating to observe how a vicar's life looked like and how he dealt with certain situations in order to bring his people towards God.
"The Seaboard Parish" is the sequel to The Annals and it is the second part of the trilogy. The story of a vicar Harry Walton continues with bringing on some of the new characters, firstly Mr. Percival, a struggling artist who steals the heart of a vicar's daughter, young Ethelwyn.
"The Vicar's Daughter" is the third and final part of the trilogy. It is a fictional autobiography narrated by Ethelwyn Percivale, whose father is a gentle, intelligent clergyman. Wynnie has a happy childhood and falls in love with a struggling painter. The book is a series of anecdotes, involving both Wynnie and her family and also her increasing circle of friends, including an extraordinary Miss Marion Clare, a fine young lady who decides to live among the poor and tend to their spiritual needs.
George MacDonald (1824-1905) was a Scottish author, poet, and Christian minister. He was a pioneering figure in the field of fantasy literature and the mentor of fellow writer Lewis Carroll. His writings have been cited as a major literary influence by many notable authors. G. K. Chesterton cited The Princess and the Goblin as a book that had "made a difference to my whole existence".