The Spanish Account: Tales of the Alhambra & Chronicle of the Conquest of Granada 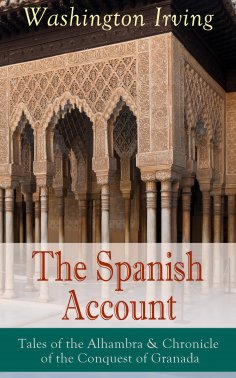 This carefully crafted ebook: "The Spanish Account: Tales of the Alhambra & Chronicle of the Conquest of Granada" is formatted for your eReader with a functional and detailed table of contents.
Tales of the Alhambra is a collection of essays, verbal sketches and stories about the Moors and Spaniards. Through these stories, sketches and essays it is described the author's journey through Spain in Andalusia, where he gives a general description of the country and people. The collection consists of around 30 Tales about the Alhambra, the city castle of the last Moorish rulers in Al-Andalus. The stories are dealing, for the most part, with after-Moorish period in which the Alhambra has been managed as a possession of the Spanish kings and was left to decay. "Tales of the Alhambra" is translated into many languages and is considered one of the most important works of the author.
During Irving's stay in Spain, after the success of his previous books, he was invited to stay at the palace of the Duke of Gor, who gave him unfettered access to his library containing many medieval manuscripts. It took him just a year to complete The Chronicles of the Conquest of Granada. The book is covering the long process of banishing the Moors from Spain and Portugal.
Washington Irving (1783-1859) was an American author, essayist, biographer, historian, and diplomat of the early 19th century. He is best known for his short stories "Rip Van Winkle" and "The Legend of Sleepy Hollow" both of which appear in his book The Sketch Book of Geoffrey Crayon, Gent. His historical works include biographies of George Washington and Oliver Goldsmith, and several histories of 15th-century Spain, dealing with subjects such as the Moors and the Alhambra. Irving served as the U.S. ambassador to Spain from 1842 to 1846.