The Ring and the Book (Unabridged) 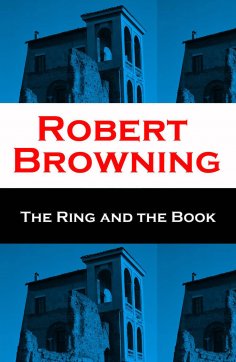 This carefully crafted ebook: "The Ring and the Book (Unabridged)" is formatted for your eReader with a functional and detailed table of contents. The Ring and the Book is a long dramatic narrative poem, and, more specifically, a verse novel, of 21,000 lines, written by Robert Browning. It was published in four volumes from 1868 to 1869 by Smith, Elder & Co. The book tells the story of a murder trial in Rome in 1698, whereby an impoverished nobleman, Count Guido Franceschini, is found guilty of the murders of his young wife Pompilia Comparini and her parents, having suspected his wife was having an affair with a young cleric, Giuseppe Caponsacchi. Having been found guilty despite his protests and sentenced to death, Franceschini then appeals—unsuccessfully—to Pope Innocent XII to overturn the conviction. The poem comprises twelve books, nine of which are dramatic monologues spoken by a different narrator involved in the case (Count Guido speaks twice), usually giving a different account of the same events, and two books (the first and the last) spoken by the author. Robert Browning (7 May 1812 – 12 December 1889) was an English poet and playwright whose mastery of dramatic verse, especially dramatic monologues, made him one of the foremost Victorian poets.