Studies of Manners: Scenes from a Courtesan's Life 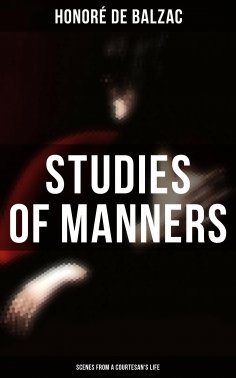 This eBook edition has been formatted to the highest digital standards and adjusted for readability on all devices. Lucien de Rubempré and Vautrin have made a pact, in which Lucien will arrive at success in Paris if he agrees to follow Vautrin's instructions on how to do so. Esther van Gobseck throws a wrench into Vautrin's plans, however, because she falls in love with Lucien. Instead of forcing Lucien to abandon her, Vautrin allows him this secret affair, but also makes good use of it. For four years, Esther remains locked away in a house in Paris, taking walks only at night. One night, however, the Baron de Nucingen spots her and falls deeply in love with her. When Vautrin realizes that Nucingen's obsession is with Esther, he decides to use her powers to help advance Lucien. Vautrin and Lucien are 60,000 francs in debt because of the lifestyle that Lucien has had to maintain. They also need one million francs to buy the old Rubempré land back. Vautrin wants to use Esther as a tool in order to extract as much money as possible out of the impossibly rich Nucingen, but things don't work out perfectly.