The Unnamable, The White Ship, Under the Pyramids 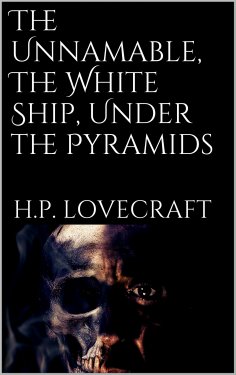 We were sitting on a dilapidated seventeenth-century tomb in the late afternoon of an autumn day at the old burying-ground in Arkham, and speculating about the unnamable. Looking toward the giant willow in the centre of the cemetery, whose trunk has nearly engulfed an ancient, illegible slab, I had made a fantastic remark about the spectral and unmentionable nourishment which the colossal roots must be sucking in from that hoary, charnel earth; when my friend chided me for such nonsense and told me that since no interments had occurred there for over a century, nothing could possibly exist to nourish the tree in other than an ordinary manner. Besides, he added, my constant talk about "unnamable" and "unmentionable" things was a very puerile device, quite in keeping with my lowly standing as an author. I was too fond of ending my stories with sights or sounds which paralysed my heroes' faculties and left them without courage, words, or associations to tell what they had experienced. We know things, he said, only through our five senses or our religious intuitions; wherefore it is quite impossible to refer to any object or spectacle which cannot be clearly depicted by the solid definitions of fact or the correct doctrines of theology-preferably those of the Congregationalists, with whatever modifications tradition and Sir Arthur Conan Doyle may supply.