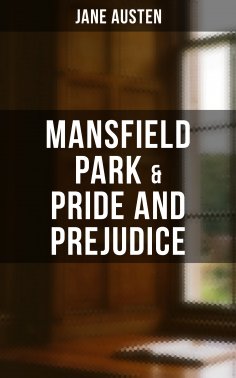 This eBook edition of "Mansfield Park & Pride and Prejudice" has been formatted to the highest digital standards and adjusted for readability on all devices.
"Pride and Prejudice" – Mr. Bennet of the Longbourn estate has five daughters, but his property is entailed, meaning that none of the girls can inherit it. His wife has no fortune, so it is imperative that at least one of the girls marry well in order to support the others on his death. The story charts the emotional development of Elizabeth Bennet who learns the error of making hasty judgments and comes to appreciate the difference between the superficial and the essential.
"Mansfield Park" – Frances "Fanny" Price, at age 10, is sent from her overburdened family home to live with her uncle and aunt in the country in Northamptonshire. It is a jolting change, from the elder sister of many, to the youngest at the estate of Sir Thomas Bertram, husband of her mother's older sister. Her aunt is kind but her uncle frightens her with his authoritative demeanor. Fanny's mother has another sister, Mrs. Norris, who doesn't like and mistreats Fanny. The story follows Fanny's development from troubling adaptation in the wealthy household, through turbulent adolescence, to marriage.