The Red Rover, Afloat and Ashore & Homeward Bound – 3 Sea Adventures in One Edition 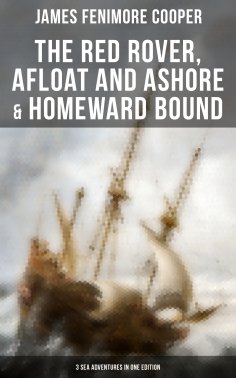 Afloat and Ashore: A Sea Tale – Miles Wallingford Jr is the son of wealthy New York landowners who chooses to go to sea after the death of his parents.
The Red Rover: Dick Fid, free black sailor Scipio Africanus and Royal Navy officer James Wilder as they encounter the famous pirate, "The Red Rover."
Homeward Bound; Or, the Chase: A Tale of the Sea – A wayward ship causes some unforeseen adventures for its passengers.
James Fenimore Cooper was a prolific and popular American writer of the early 19th century. His historical romances of frontier and Indian life in the early American days created a unique form of American literature. Before embarking on his career as a writer, Cooper served in the U.S. Navy, which greatly influenced many of his novels.