FROM THE EARTH TO THE MOON & Its Sequel, Around the Moon 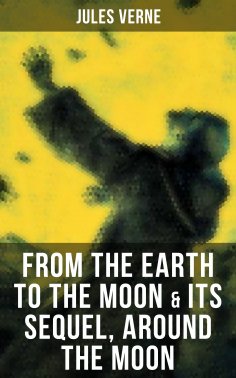 "From the Earth to the Moon" is a humorous science fantasy story written in 1865 by Jules Verne and is one of the earliest entries in that genre. It tells the story of three well-to-do members of a post-American Civil War gun club who build an enormous sky-facing columbiad and ride a spaceship fired from it to the moon.
"Around the Moon" is the sequel, which continues the trip to the moon which left the reader in suspense after the previous novel.
Jules Verne (1828-1905) was a French novelist who pioneered the genre of science fiction. A true visionary with an extraordinary talent for writing adventure stories, his writings incorporated the latest scientific knowledge of his day and envisioned technological developments that were years ahead of their time. Verne wrote about undersea, air, and space travel long before any navigable or practical craft were invented. Verne wrote over 50 novels and numerous short stories.