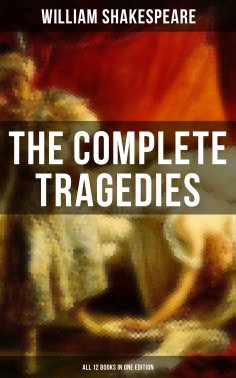 Shakespeare wrote tragedies from the beginning of his career. One of his earliest plays was the Roman tragedy Titus Andronicus, which he followed a few years later with Romeo and Juliet. However, his most admired tragedies were written in a seven-year period between 1601 and 1608. These include his four major tragedies Hamlet, Othello, King Lear and Macbeth, along with Antony & Cleopatra, Coriolanus, Cymbeline, Julius Caesar and the lesser-known Timon of Athens and Troilus and Cressida.
Contents:
Romeo And Juliet
Coriolanus
Titus Andronicus
Timon Of Athens
Julius Caesar
Macbeth
Hamlet, Prince Of Denmark
Troilus And Cressida
King Lear
Othello, The Moor Of Venice
Antony And Cleopatra
Cymbeline
William Shakespeare (1564 – 1616) was an English poet and playwright, widely regarded as the greatest writer in the English language and the world's pre-eminent dramatist. He is often called England's national poet and the "Bard of Avon". His extant works, including some collaborations, consist of about 38 plays, 154 sonnets, two long narrative poems, and a few other verses, the authorship of some of which is uncertain.