THE SCIENCE OF BEING GREAT 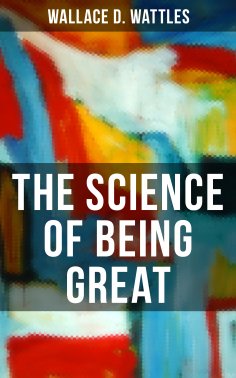 This eBook edition of "The Science of Being Great" has been formatted to the highest digital standards and adjusted for readability on all devices.
The Science of Being Great is the third volume of a series known as "The Science of" trilogy or "Financial Success Through Creative Thought" by Wallace Delois Wattles. The first two volumes of the trilogy cover money and health, while this third volume is a personal self-help book of the author. He is introducing us to a principle of power and showing us the immense effect of the power of positive thinking.
Wallace Delois Wattles (1860-1911) was an American author. As a New Thought writer, he remains personally somewhat obscure, but his writing has been widely quoted and remains in print in the New Thought and self-help movements. Wattles often travelled to Chicago, where he gave "Sunday night lectures" among several leading New Thought authors. He studied the writings of Georg Wilhelm Friedrich Hegel and Ralph Waldo Emerson and recommended the study of their books to his readers who wished to understand what he characterized as "the monistic theory of the cosmos." Wattles' best known work is a 1910 book called The Science of Getting Rich in which he explained how to become wealthy.