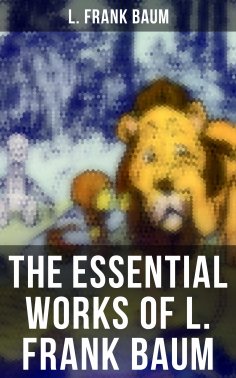 Musaicum Books presents to you this carefully created collection of L. Frank Baum's renowned fantasy novels, mystery novels for young readeers and fairy tales. This ebook has been designed and formatted to the highest digital standards and adjusted for readability on all devices. Content: Wizard of Oz Collection: The Wonderful Wizard of Oz The Marvelous Land of Oz The Woggle-Bug Book Ozma of Oz Dorothy and the Wizard in Oz The Road to Oz The Emerald City of Oz The Patchwork Girl of Oz Little Wizard Stories of Oz Tik-Tok of Oz The Scarecrow of Oz Rinkitink in Oz The Lost Princess of Oz The Tin Woodman of Oz The Magic of Oz Glinda of Oz Other Works: Mother Goose in Prose The Magical Monarch of Mo Dot and Tot of Merryland American Fairy Tales The Master Key The Life and Adventures of Santa Claus The Enchanted Island of Yew Queen Zixi of Ix John Dough and the Cherub The Sea Fairies Sky Island Short Stories: The Runaway Shadows A Kidnapped Santa Claus Nelebel's Fairyland The Tiger's Eye The Enchanted Buffalo Under pseudonyms: As Edith Van Dyne: Aunt Jane's Nieces Aunt Jane's Nieces Abroad Aunt Jane's Nieces at Millville Aunt Jane's Nieces at Work Aunt Jane's Nieces in Society Aunt Jane's Nieces and Uncle John Aunt Jane's Nieces on Vacation Aunt Jane's Nieces on the Ranch Aunt Jane's Nieces Out West Aunt Jane's Nieces in the Red Cross Mary Louise Mary Louise in the Country Mary Louise Solves a Mystery Mary Louise and the Liberty Girls As Laura Bancroft: Twinkle and Chubbins Policeman Bluejay L. Frank Baum (1856-1919) was an American author chiefly known for his children's books, particularly The Wonderful Wizard of Oz which chronicles the adventures of a young farm girl named Dorothy in the magical Land of Oz, after she and her pet dog Toto are swept away from their Kansas home by a cyclone. The novel is one of the best-known stories in American literature and The Library of Congress has declared it "America's greatest and best-loved homegrown fairytale."