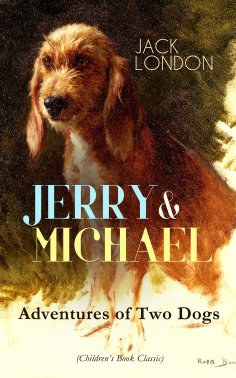 This carefully crafted ebook: "JERRY & MICHAEL – Adventures of Two Dogs (Children's Book Classic)" is formatted for your eReader with a functional and detailed table of contents.
Jerry of the Islands: A True Dog Story – Jerry is an Irish terrier who finds himself on the island of Malaita, after the ship he was on got attacked. Jerry is accepted by the local tribe, but when the tribe's sorcerer decides to sacrifice him, he manages to avoid it and his adventure begins.
Michael, Brother of Jerry – Michael, an Irish terrier, was born and raised in the Solomon Islands. Working as a slave hunter aboard a schooner, Michael is accidentally left on the beach, and his journey around the world begins with the new owner.
Jack London (1876-1916) was an American novelist, journalist, and social activist. His amazing life experience also includes being an oyster pirate, railroad hobo, gold prospector, sailor, war correspondent and much more. He wrote adventure novels & sea tales, stories of the Gold Rush, tales of the South Pacific and the San Francisco Bay area - most of which were based on or inspired by his own life experiences.