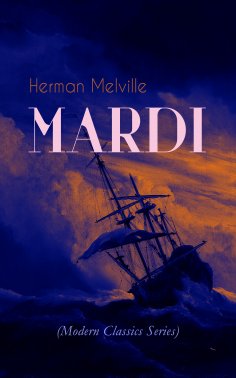 This carefully crafted ebook: "MARDI (Modern Classics Series)" is formatted for your eReader with a functional and detailed table of contents.
Mardi, and a Voyage Thither details the traveling of an American sailor who abandons his whaling vessel to explore the South Pacific. The center of the story is a romance between the narrator Taji and Yillah, the mysterious blonde who suddenly appears and disappears. We also follow the voyage of the philosopher Babbalanja and his travel companions through the archipelago of Mardi. Beginning as a travelogue, the adventure story gives way to a romance story, which gives way to a philosophical quest.
Herman Melville was an American novelist, short story writer, and poet of the American Renaissance period. His writing draws on his experience at sea as a common sailor, exploration of literature and philosophy, and engagement in the contradictions of American society in a period of rapid change. His best known works include Typee, a romantic account of his experiences in Polynesian life, its sequel Omoo, and his novel Moby-Dick.