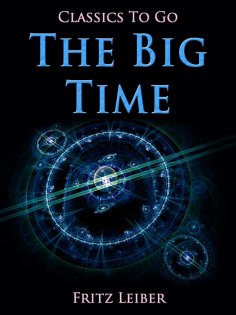 Fritz Reuter Leiber, Jr. (December 24, 1910 – September 5, 1992) was an American writer of fantasy, horror, and science fiction. He was also a poet, actor in theatre and films, playwright and chess expert. With writers such as Robert E. Howard and Michael Moorcock, Leiber can be regarded as one of the fathers of sword and sorcery fantasy. Moreover, he excelled in all fields of speculative fiction, writing award-winning work in fantasy, horror, and science fiction.“The Big Time” is a short science fiction novel by Fritz Leiber. It was awarded the Hugo Award during 1958. The Big Time is a story involving only a few characters, but with a vast, cosmic back story. (Excerpt from Wikipedia)