The Barbarism of Berlin 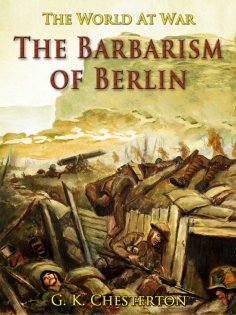 Gilbert Keith Chesterton,(29 May 1874 – 14 June 1936) better known as G. K. Chesterton, was an English writer, lay theologian, poet, philosopher, dramatist, journalist, orator, literary and art critic, biographer, and Christian apologist. Chesterton is often referred to as the "prince of paradox." Time magazine, in a review of a biography of Chesterton, observed of his writing style: "Whenever possible Chesterton made his points with popular sayings, proverbs, allegories—first carefully turning them inside out." G.K. Chesterton's The Barbarism of Berlin is a lengthy essay defending the decision by the U.K. to join World War I and fight the Central Powers, Germany in particular. (Excerpt from Wikipedia)