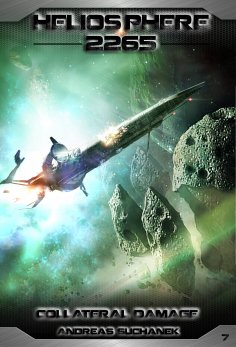 Captain Jayden Cross is facing his darkest hour. A fleet of Parlid vessels is moving to intercept the crippled HYPERION, intent on avenging the bloody attack on their homeworld. Chaos reigns on board the interlink cruiser: officers loyal to the new regime are engaged in a battle to the death with the rebel forces. Captain Cross will soon have to accept the far-reaching consequences of his fatal decision.

This is the seventh Volume of Heliosphere 2265. The series is available in e-book (monthly) and print (bi-monthly) editions.
It is written by Andreas Suchanek (Sternenfaust, Maddrax, Professor Zamorra) and produced with the support of Arndt Drechsler (cover) and Anja Dyck (interior illustrations).