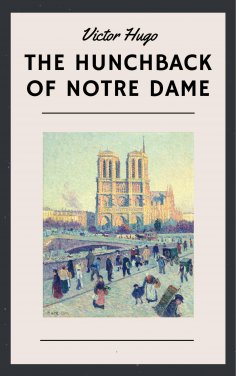 "A few years ago, while visiting or, rather, rummaging about Notre-Dame, the author of this book found, in an obscure nook of one of the towers, the following word, engraved by hand upon the wall:—
ANANKE.
These Greek capitals, black with age, and quite deeply graven in the stone, with I know not what signs peculiar to Gothic caligraphy imprinted upon their forms and upon their attitudes, as though with the purpose of revealing that it had been a hand of the Middle Ages which had inscribed them there, and especially the fatal and melancholy meaning contained in them, struck the author deeply.
He questioned himself; he sought to divine who could have been that soul in torment which had not been willing to quit this world without leaving this stigma of crime or unhappiness upon the brow of the ancient church."

Victor Hugo (1802 – 1885) was a French poet, novelist, and dramatist of the Romantic movement. Hugo is considered to be one of the greatest and best-known French writers.