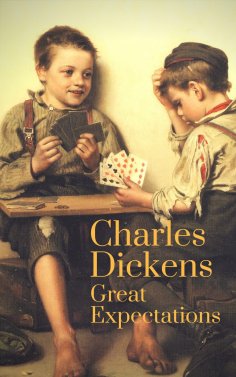 "She was an orphan like myself; like me, too, had been brought up by hand. She was most noticeable, I thought, in respect of her extremities; for, her hair always wanted brushing, her hands always wanted washing, and her shoes always wanted mending and pulling up at heel. This description must be received with a week-day limitation. On Sundays, she went to church elaborated.
Much of my unassisted self, and more by the help of Biddy than of Mr. Wopsle's great-aunt, I struggled through the alphabet as if it had been a bramble-bush; getting considerably worried and scratched by every letter. After that I fell among those thieves, the nine figures, who seemed every evening to do something new to disguise themselves and baffle recognition. But, at last I began, in a purblind groping way, to read, write, and cipher, on the very smallest scale.
One night I was sitting in the chimney corner with my slate, expending great efforts on the production of a letter to Joe. I think it must have been a full year after our hunt upon the marshes, for it was a long time after, and it was winter and a hard frost. With an alphabet on the hearth at my feet for reference, I contrived in an hour or two to print and smear this epistle:—"