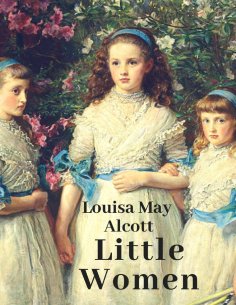 “We will take this moment to give a little sketch of the four sisters, who sat knitting away in the twilight, while the December snow fell quietly without, and the fire crackled cheerfully within. It was a comfortable room, though the carpet was faded and the furniture very plain, for a good picture or two hung on the walls, books filled the recesses, chrysanthemums and Christmas roses bloomed in the windows, and a pleasant atmosphere of home peace pervaded it. Margaret, the eldest of the four, was sixteen, and very pretty, being plump and fair, with large eyes, plenty of soft brown hair, a sweet mouth, and white hands, of which she was rather vain. Fifteen-year-old Jo was very tall, thin, and brown, and reminded one of a colt, for she never seemed to know what to do with her long limbs, which were very much in her way. She had a decided mouth, a comical nose, and sharp, gray eyes, which appeared to see everything, and were by turns fierce, funny, or thoughtful. Her long, thick hair was her one beauty, but it was usually bundled into a net, to be out of her way. Round shoulders had Jo, big hands and feet, a flyaway look to her clothes, and the uncomfortable appearance of a girl who was rapidly shooting up into a woman and didn't like it. Elizabeth, or Beth, as everyone called her, was a rosy, smooth-haired, bright-eyed girl of thirteen, with a shy manner, a timid voice, and a peaceful expression which was seldom disturbed. Her father called her 'Little Miss Tranquility', and the name suited her excellently, for she seemed to live in a happy world of her own, only venturing out to meet the few whom she trusted and loved. Amy, though the youngest, was a most important person, in her own opinion at least.”

“Little Women” by Louisa May Alcott was first published in 1868/69. The bestselling story about the four sisters Meg, Jo, Beth and Amy is based on the author and her three sisters. “Little Women” was adapted for cinema and television several times.