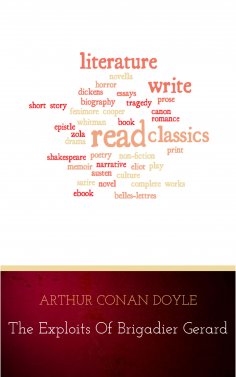 Sir Arthur Ignatius Conan Doyle (22 May 1859 – 7 July 1930) was a Scottish writer and physician, most noted for his fictional stories about the detective Sherlock Holmes, which are generally considered milestones in the field of crime fiction. Brigadier Gerard is the hero of a series of comic short stories by the British writer Arthur Conan Doyle. The hero, Etienne Gerard, is a Hussar in the French Army during the Napoleonic Wars. Gerard's most notable attribute is his vanity – he is utterly convinced that he is the bravest soldier, greatest swordsman, most accomplished horseman and most gallant lover in all France. Gerard is not entirely wrong, since he displays notable bravery on many occasions, but his self-satisfaction undercuts this quite often. Obsessed with honour and glory, he is always ready with a stirring speech or a gallant remark to a lady.