A Blade of Dark Ebony 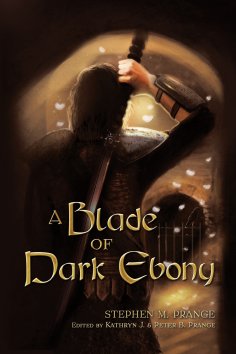 A Blade of Dark Ebony tells the story of Ebon, who at the age of 20, is forced to face the reality of the world in which he lives, a world that can be capricious, but can also offer exciting rewards. Supported by key friends (Mendel, Gabriel and Caliel, the love of his life) he leaves the sheltered life of his youth to search for his real identity. Is he just like the father who raised him, or is he someone quite different? One thing he knows: the man who raised him as a father was one of the most skilled swordsmen of his day and he will have to work long and hard to follow in his footsteps. Impatient to gain glory, he needs to learn patience and commitment and come to understand that the training of the mind is every bit as important as the training of the body.As the story develops, the thoughts and ideals of his youth are severely challenged and he must decide the path he will follow. Even as his friends follow their planned path to glory through the army, Ebon is torn from their tight-knit fellowship and becomes a part of a mercenary army known as the Black Knights led by Arthur Pandell. Arthur, himself a swordsman of growing legend, decides to mentor Ebon. Enrolling Ebon in the intensive training program of mind and body he will need to succeed, Arthur unwittingly prepares Ebon to enter the first great tournament of the best warriors in the country. To gain glory Ebon must not only overcome the intrigue of his opponents, but the temptation to yield the very ideals of his young life. The pressure to win only intensifies when Ebon learns that only by winning can he help his beloved Caliel.

Stephen was born in suburban Chicago, Illinois (USA) but moved to Queensland, Australia at the age of 12. Already a student of history, the ideas for a fantasy fiction series began to develop during high school. Stephen started his university studies in an aero-space engineering program, but decided to take a career path that would be more people orientated. Graduating from the University of Southern Queensland, he began his career as a math and history teacher. The pull of the story that had been developing for years, led him to leave full time teaching and become a tutor in order to devote more time to writing. When his brothers Tim and James, still living in the United States, offered him support, he turned to the USA and now resides in Georgia.Even as a young child Stephen was a natural story teller, entertaining family and friends with vivid tales. Stephen has now honed his skills to present compelling stories of characters that meet life’s challenges. Always a keen observer of life, Stephen writes to provide a thoughtful commentary on the world in which we live.