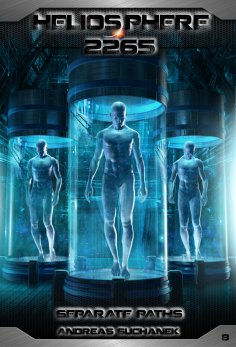 The HYPERION has survived its last mission, but at a terrible cost. Once the pride of the Space Navy, the HYPERION is now little more than a wreck. As work on the repairs continues, the ship's officers must go their separate ways. Captain Cross and Alpha 365 set out on a mission to neutralize the threat posed by the kill chips. Likewise, Tess Kensington and Lukas Akoskin journey into the belly of the beast - where they will soon encounter a familiar face...
And as Admiral Pendergast plans her next steps, President Skolberg plays his hand.

This is the eigth Volume of Heliosphere 2265. The series is available in e-book (monthly) and print (bi-monthly) editions.
It is written by Andreas Suchanek (Sternenfaust, Maddrax, Professor Zamorra) and produced with the support of Arndt Drechsler (cover) and Anja Dyck (interior illustrations).