The Battle of Life 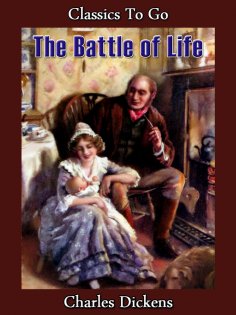 Two sisters, Grace and Marion, live happily in an English village with two servants Clemency Newcome and Ben Britain, and their good-natured widower father Dr Jeddler. Dr Jeddler is a man whose philosophy is to treat life as a farce. Marion, the younger, is betrothed to Albert Heathfield, Jeddler's ward who is leaving the village to complete his studies. He entrusts Marion to Grace's care and makes a promise to return to win Marion's hand. Michael Warden, a libertine who is about to leave the country, is thought by the barristers Snitchey and Craggs to be about to seduce the younger sister into an elopement. Clemency spies Marion one night in her clandestine rendezvous with Warden. On the day that Albert is to return, however, it is found out that Marion has run off. Her supposed elopement causes much grief to both her father and her sister. Six years pass. Clemency is now married to Britain and the two have set up a tavern in the village. After nursing heartbreak, Albert marries Grace instead and she bears him a daughter, also called Marion. On the birthday of Marion, Grace confides in Albert that Marion has made a promise to explain her so-called "elopement" in person. Marion indeed appears that evening by sunset and explains her disappearance to the parties involved. It turns out that Marion has not "eloped" but has instead been living at her aunt Martha's place so as to allow Albert to fall in love with Grace. Tears are shed and happiness and forgiveness reign as the missing sister is reunited with the rest.
(Excerpt from Wikipedia)