Henry James: The Turn of the Screw (English Edition) 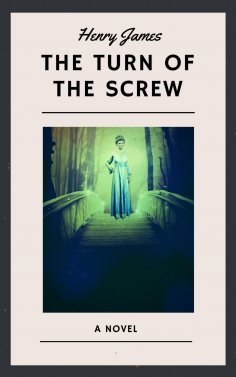 "I remember the whole beginning as a succession of flights and drops, a little seesaw of the right throbs and the wrong. After rising, in town, to meet his appeal, I had at all events a couple of very bad days—found myself doubtful again, felt indeed sure I had made a mistake. In this state of mind I spent the long hours of bumping, swinging coach that carried me to the stopping place at which I was to be met by a vehicle from the house. This convenience, I was told, had been ordered, and I found, toward the close of the June afternoon, a commodious fly in waiting for me."

"The Turn of the Screw" by Henry James was first published in 1898. The horror novel focuses on a governess who, caring for two children at a remote estate, becomes convinced that the grounds are haunted. "The Turn of the Screw" has been adapted numerous times in radio drama, film, stage, and television, including a 1950 Broadway play, and the 1961 film The Innocents.

The American-British author Henry James (1843 – 1916) is considered by many to be among the greatest novelists in the English language.