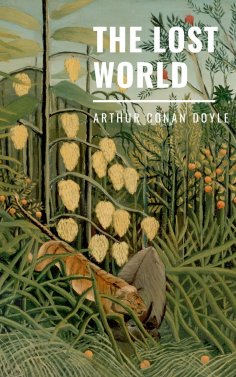 “I stood like a man paralyzed, still staring at the ground which I had traversed. Then suddenly I saw it. There was movement among the bushes at the far end of the clearing which I had just traversed. A great dark shadow disengaged itself and hopped out into the clear moonlight. I say "hopped" advisedly, for the beast moved like a kangaroo, springing along in an erect position upon its powerful hind legs, while its front ones were held bent in front of it. It was of enormous size and power, like an erect elephant, but its movements, in spite of its bulk, were exceedingly alert. For a moment, as I saw its shape, I hoped that it was an iguanodon, which I knew to be harmless, but, ignorant as I was, I soon saw that this was a very different creature. Instead of the gentle, deer-shaped head of the great three-toed leaf-eater, this beast had a broad, squat, toad-like face like that which had alarmed us in our camp. His ferocious cry and the horrible energy of his pursuit both assured me that this was surely one of the great flesh-eating dinosaurs, the most terrible beasts which have ever walked this earth. As the huge brute loped along it dropped forward upon its fore-paws and brought its nose to the ground every twenty yards or so. It was smelling out my trail. Sometimes, for an instant, it was at fault. Then it would catch it up again and come bounding swiftly along the path I had taken.”

“The Lost World” by Arthur Conan Doyle was first published in 1912. The story about an expedition to the Amazon basin, where dinosaurs and other extinct creatures still survive, soon became a bestseller. The character of Professor Challenger was introduced in “The Lost World”.

Arthur Conan Doyle (1859 – 1930) was a British writer. His Sherlock Holmes stories are generally considered milestones in the field of crime fiction.