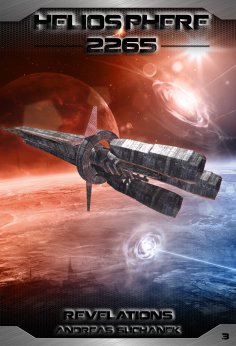 The HYPERION reaches NOVA Station with its mysterious cargo. But their routine mission ends abruptly when the space station is rocked by an assassination and a hostile armada moves in to attack. Can the HYPERION save NOVA Station?
Meanwhile, Admiral Michalev finally discloses the truth about the Parlid retrieved from the Elnath System. His revelation will stun the Admiralty and the President. How will the most powerful woman in the Solar Union respond?

This is the third Volume of Heliosphere 2265.
The series is available in e-book (monthly) and print (bi-monthly) editions.