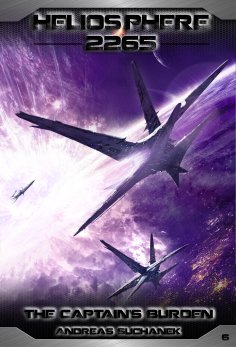 Captain Jayden Cross is set to depart on one final mission as the commander of the HYPERION. His death warrant has been signed - and he will not die alone. But with Sarah McCall's warning still ringing in his ears, the commander of mankind's first interlink cruiser knows that he will face some difficult decisions. Only one thing seems certain in this game of shadows: however Captain Cross decides to act, there will be a terrible price to pay.

This is the sixth Volume of Heliosphere 2265. The series is available in e-book (monthly) and print (bi-monthly) editions.
It is written by Andreas Suchanek (Sternenfaust, Maddrax, Professor Zamorra) and produced with the support of Arndt Drechsler (cover) and Anja Dyck (interior illustrations).